Teatro trono from Bolivia spent a week with the Spanish class of the ILSE-LÖWENSTEIN Schule: the students were excited with the group, the climate topic and also practicing the Spanish language. Some of them were rather fluent in Spanish and translated to other students so communication was easy in this project. Students from Ilse-Löwenstein-Schule were creative and excited to start the project and quickly created friendship with the group so that together they could produce the best results for the final event on Friday.

Starting from Monday afternoon the young people started the project with a lot of physical fitness exercise and challenging games to make everyone free and ready for the project. The main goal was to train one’s attention, trust in each other and collective thinking and to raise the awareness for your own phyical body.
On Tuesday they formed several groups and created scenarios that show causes and effect of climate

change as well as solutions to protect then climate. Within these groups, students had to use creative methods to express their thoughts and feelings. With the assistance of their Bolivians guests the students used creative methods like drawing ,acting and many more methods in presenting a certain scenario. Later on, one group after another went on stage and presented  its scenario. The other groups gave  comments and advices so that they could better their results and improve their play.

The next days, activities were based on perfecting what they had created – editing and improving every scene. The next task was to combine all the scenarios: who should start, which instruments should be used etc. Everyone had to join in with his or her specific talent: students who were good at drawing drew pictures for the scenery; others were good at playing piano and produced the music; some who were good in dancing made the best dancing styles for the project. Thus many beautiful designs were developed to make the best results.

After school the Bolivian and German students enjoyed several activities together like sightseeing, evening meetings with music and dancing as well as cooking and eating together. So it was a beautiful week for the students and their guests: They had a lot of fun activities while working on the climate change subject and making new friends from Bolivia. It was a creative work for all people, a week in which everyone got the opportunity to learn and teach each other as well as  to show others the talents  that each one has blessed with.

On Friday, the students and the “Tronos” were excited to perform in public what they have prepared for the whole week. Also their classmates were happy to get the opportunity to see their creative works about climate change. The performance started at 12:00pm and was perfect for everyone. At the end the audience gave standing ovations and some joined  in dancing together with the students and Teatro Trono. At the end the director of the ILSE-LÖWENSTEIN-Schule  thanked and gave flowers to everybody who supported the project. 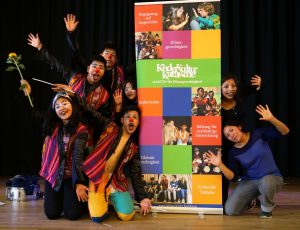 What a night! On last Saturday we had our final sh

Finally we are coming together in 2 days with all

This website uses cookies to improve your experience while you navigate through the website. Out of these, the cookies that are categorized as necessary are stored on your browser as they are essential for the working of basic functionalities of the website. We also use third-party cookies that help us analyze and understand how you use this website. These cookies will be stored in your browser only with your consent. You also have the option to opt-out of these cookies. But opting out of some of these cookies may affect your browsing experience.
Necessary immer aktiv
Necessary cookies are absolutely essential for the website to function properly. This category only includes cookies that ensures basic functionalities and security features of the website. These cookies do not store any personal information.
Non-necessary
Any cookies that may not be particularly necessary for the website to function and is used specifically to collect user personal data via analytics, ads, other embedded contents are termed as non-necessary cookies. It is mandatory to procure user consent prior to running these cookies on your website.
SPEICHERN & AKZEPTIEREN